In the beginning, there was the school jotter. My first stories were scribbled in pencil in half-used lined school notebooks, liberated at the end of the year, with their boring English or History notes ripped out, leaving the covers floppy and the staples loose.

Then there was the typewriter. When I was 16, with delusions of being a writer, I asked for a typewriter for Christmas. It was, I seem to recall, an Olivetti portable, with a hard plastic case that clipped to the top. It weighed a ton, the ribbons faded quickly, and I developed sore fingers from accidentally slipping between keys with my complete lack of manual dexterity. But I loved it. I wrote my sixth-year dissertations on it, then reviews for the SF&F society newsletter at university, and stories… loads of stories.

Then there was the word processor. At the end of my first term at university, I had a little bit of money from a bursary in my bank account, and I’d seen a friend’s Amstrad PCW. If you made a mistake, you didn’t have to strike it out, or use Tippex. It had a delete key! You could go back and change words without retyping the whole story! My Amstrad PCW 8256, with its LocoScript word processing software, saw me through university; all my essays, all my articles, all my short stories (including one that was published in Exuberance magazine, and a series of humorous fantasy stories in the SF&F society newsletter Sirius Moonlight), all my letters, my final year dissertation – everything was written on my Amstrad. I even started a novel, but didn’t get very far.

Then there was a succession of PCs. My first PC, a Dell 486DX2/66, came with a copy of Microsoft Office, so Word became my primary writing tool. I sent off my strange 3″ PCW disks, incompatible with anything else in the known universe, and got my incomplete novel transferred to the hard disk of my PC, where it sat, neglected. I started something new, but that didn’t get very far either.

I tried Nanowrimo a couple of times, once with Word, once with Google Docs, but once again, the projects stalled. A few thousand words here and there.

In 2010, I heard about Scrivener. At the time, it was Mac-only, but there was a Windows beta, which sounded promising. I filed it away in the back of my mind for later.

In 2012, I remembered about Scrivener. I was keen, after years of failure, to complete a novel. I’d started too many times, failed too many times, I was over 40, and the only success I’d had was a single short story published when I was at university.

I downloaded the trial, and ran through the (excellent) tutorial. I didn’t have to give it any more thought – I didn’t need the rest of the 30-day trial.

Reader, I bought it. At 22:40 on 15th March 2012, five years ago today, I paid for the full version of Scrivener and started working on The Chimney Rabbit. Nine months later, I’d completed the first draft – over 70,000 words.

To date, I’ve completed nine novels in Scrivener, totalling about 400,000 words. Two of these novels have been published: The Beast on the Broch:

And The Wreck of the Argyll: 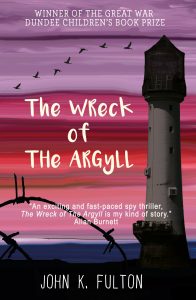 Over the course of those nine novels in five years, Scrivener has helped with planning, writing, editing, rewriting, generating drafts, storing research, and generally holding my hand through the process. I don’t use all of its features – but I don’t need to. You can pick and choose which features suit you best. When I was rewriting The Beast on the Broch, I was able to keep two whole manuscripts – original and new – in the same project, and view them side-by-side. I can’t imagine how difficult it would have been to carry out my extensive rewrite without that feature, but it was the first time I’d used it – it was sitting there unobtrusively, just waiting for me to need it.

The release of the iOS version was the cherry on the cake – it allows me to work seamlessly on the same novel while at my desk or on the move – or more likely, on my armchair.

It seems to me that my writing falls into two phases – before Scrivener, and since.

I know which phase I prefer.