The Wreck of the Argyll

Dundee, 1915. Twelve-year-old Nancy Caird is desperate to do her bit for the war. So when she suspects one of her teachers of being a German spy, she’s determined to foil his plans, and ropes in the reluctant Jamie Balfour to help her uncover the scheme.

Midshipman Harry Melville is on his first voyage aboard HMS Argyll as it forges through the black and stormy North Sea, unaware of both hidden rocks and German plots that threaten the ship.

When Nancy and Jamie’s suspicions are confirmed, and they discover HMS Argyll is in deadly danger, they’re drawn into a web of espionage, secrets, and betrayal, where no-one is as they seem and no-one can be trusted.

This book is based on the real-life wreck of HMS Argyll at the Bell Rock Lighthouse in 1915, and is the winner of the Great War Dundee Children’s Book Prize. Originally published by Cargo in 2015.

Published February 19th 2018 by Cranachan Publishing as part of their Yesteryear series of historical children’s fiction.

Cover design by Anne Glennie based on artwork by Qynn Herd.

“The book is a thrilling and fascinating story based on an actual exciting event.”

“It’s an exciting and fast-paced spy thriller. The Wreck of the Argyll is my kind of story.”

Abi Elphinstone, author of The Dreamsnatcher, The Shadow Keeper, and The Night Spinner, at Moontrug:

“… perfectly captures the clandestine world of spies and all the excitement and danger lurking there.”

“… the perfect mix of brave children, dastardly villains and a totally dramatic but believable plot.”

“… fast-paced with some great dialogue exchanges and there’s the most fantastic conclusion … It really is quite a little gem.”

“This book is brilliant, I read it in one sitting… Loved the descriptions and the tension.”

“… the story is action-packed, fast-paced, and easy to follow, making it ideal for middle-grade readers.”

“Suspense slowly builds as Nancy pursues her theory, and the pacing reaches a fever pitch as her suspicions become confirmed… A satisfying World War I mystery with age-appropriate themes that will resonate with young readers.”

Kate at the The Quiet Knitter:

“A fascinating and exciting tale that I would highly recommend for all readers.”

A lonely girl. A wild beast. An unforgettable friendship.

12-year-old Talorca is a Pictish girl living in North-east Scotland in 799 AD. When Gaelic-speaking Dalriadans attack her village, her world is turned upside down. Her only friend is the mythical Pictish Beast, who has been injured by the Dalriadans. Talorca decides to take a stand against the invaders and hatches a plan to drive them out.

But she can only do that with the help of the wild beast on the broch.

Published September 9th 2016 by Cranachan Publishing as part of their Yesteryear series of historical children’s fiction.

Cover art by Dawn Treacher, with design by Anne Glennie at Cranachan.

Abi Elphinstone, author of The Dreamsnatcher, The Shadow Keeper, and The Night Spinner:

“A compelling tale steeped in magic and myth.”

“It is … important, however, that children outside Scotland also have the opportunity to come to know and value something of the the history and culture of this unique, special and, in many places, unspeakably beautiful country (midges apart). This fine book will, I’m sure, contribute significantly on all these fronts, as well as giving many children a hugely enjoyable and entertaining read. It could well end up helping to grow their humanity too.”

“With a story that pulls you through history to a simpler, yet more dangerous, time, The Beast on the Broch is a tale not to be missed.”

Anna at Anna’s Adventures in Bookland:

“A magical story that will capture your imagination and your heart.”

“Bursting with adventure, bravery, and a glorious Pictish charm.”

“A mythical tale perfect for children.”

“… resurrects a world about which we know little, and yet renders it completely plausible.”

Kate at The Quiet Knitter:

“… the story is one that you can happily become transfixed with and spend a happy few hours soaking in every page of this beautifully written novel.”

“…skilfully recreates the people and the landscape of Scotland’s distant past, with a strong emphasis on timeless themes of loneliness, loyalty and friendship.”

Under the Mountain and other stories

In collaboration with illustrator Anh Diep, Under the Mountain and other stories is a collection of eight sci-fi and fantasy short stories, featuring tales previously published in Exuberance, Shoreline of Infinity, and the Leicester Writes Short Story Prize Anthology 2018, along with five new previously-unpublished stories.

From ancient Camulodunum to the far future; from intelligent kitchen appliances to deadly computer games; from the future of medicine to the future of humanity itself…

“Call of the Void”, included in the Severed Souls anthology from Space Cat Press. 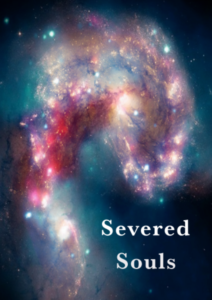 “Keeper of the Light”, included in the Dark Scotland anthology from Darkstroke. 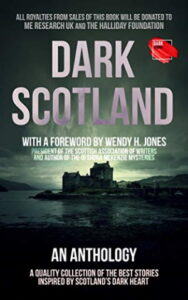 “Scattered Across the Stars” and “Always Carry a Spare”, included in the Uncharted Constellations anthology from Space Cat Press. 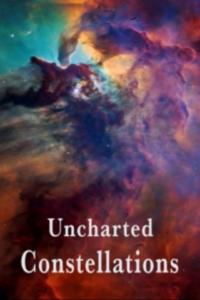 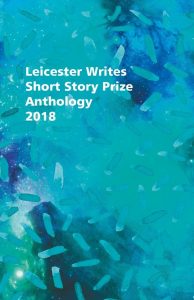 “The Whisperer” was also selected for the Best of British Science Fiction 2018 anthology from Newcon Press. 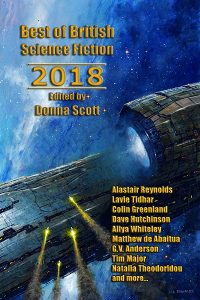 “Time for Tea”, Shoreline of Infinity issue 3. Collected in Under the Mountain and other stories. 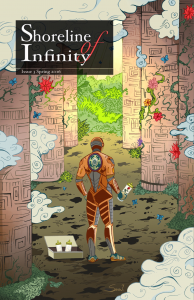 “The View from the Window”, Exuberance issue 4 (1991/1992). Collected in Under the Mountain and other stories. 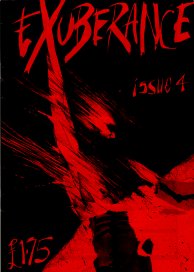