I’ve always been fascinated by the Pictish Beast. The Picts left behind very little of their culture, with the exception of the amazing carved stones you can find across Scotland, and while most of the animals on those stones are recognisably snakes, wolves, eagles, salmon, and so on, two-fifths of the creatures carved on the stones are images of the enigmatic ‘beast’. 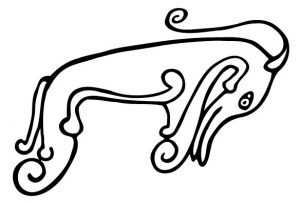 What was it? It must have been important, to be so common. Was it a dolphin, with its long nose? But dolphins don’t have horns or legs. A kelpie? We’ll probably never know. But it’s these mysteries and gaps in history that fire the imagination.

When I visited Dundee recently, I took a trip to the McManus gallery. They had a Celtic exhibition on, including several Pictish stones – many of which contained a depiction of the beast. 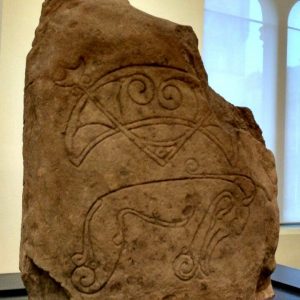 In Stuart McHardy’s excellent wee book On the Trail of Scotland’s Myths and Legends, he includes the story of Martin’s Stane. This isn’t the Strathmartine stone, but another, nearby Pictish stone, which is also known as the Balluderon Stone. That, too, has a Pictish beast on it, and it’s given rise to the legend of Martin the Dragonslayer.

The story goes that there was a farmer at Pittempton near Dundee. (By the way, note that Pit- placenames go all the way back to the Picts – one of the few tiny fragments of their language to survive!) This farmer had nine daughters, and Martin was betrothed to marry the eldest. One day the farmer was feeling thirsty, so sent his eldest daughter off to the well to get him a drink. When she didn’t come back, he sent the second-eldest… Like most fathers in folklore, he was shockingly bad at recognising patterns, so one by one he sent his daughters off to the well. When none of them came back, the lazy father went off to the well himself – and saw a dragon coiled around the well, the bodies of his daughters ripped to pieces around it.

He raised an alarm, and soon the entire village, including Martin, was roused with whatever weapons came to hand, and they chased off the dragon. As the beast reached the Dighty Burn, Martin was close, and the pursuing crowd yelled “Strike, Martin!” – and he did, striking the creature with a club and wounding it. Eventually the villagers chased the beast down on horseback (Martin’s Stane has horse-riders on it) and slayed the dragon. On the spot where the beast died, they raised Martin’s Stane as a monument; and a nearby village was named Strikemartin in honour of the hero. Over time, Strikemartin became Strathmartine…

Which makes me feel a little bit better about making up my own stories about the Picts, their stones, and the Pictish Beast. 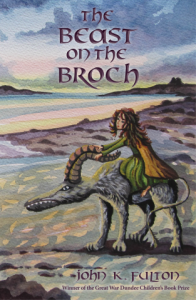