It’s been a while since I was on speaking terms with the muse. Over the past few years I’ve kept myself busy with the occasional short story (some of which I’m quite pleased with) but the fact of the matter is that I completed my last children’s novel manuscript, Pax Caledonia, at the end of 2016, and that’s a long time ago now. I did do another editing pass on that book (my Roman Scotland children’s novel) in 2020, but that’s as far as it went.

After a prolific period of 2012 to 2016, where I wrote nine novels (two of which were published), I went into 2022 with a five year gap where I hadn’t written any new books at all. It was starting to look like I’d never write another full-length manuscript again.

I was still writing short stories, so it wasn’t a total loss. And I still had my ideas files, which I tweaked and worked on from time to time. There were two files in particular that started to grow into almost usable form – one, a science fiction novel set on the moons of Jupiter, and the other a fantasy/historical work set in the world of The Iliad.

The science fiction novel grew to the stage where I had a chapter breakdown, but stalled there. The Iliad book, on the other hand, started to coalesce, until, on the 1st of May 2022, I sat down and wrote the first 1800 words.

Over the course of the next three months, I bashed out a first draft. I didn’t write quite every day, but near enough. In particular I had a break of about a week when I went to visit my Mum up in Scotland in June, and another break in July when we had that horrendous heatwave, but I always managed to get back into it, and slowly but steadily the wordcount increased, until on the 30th July I wrote the last 1249 words, bringing the total to 71689.

I kept a spreadsheet because I’m that sort of geek.

It was a relief when I got to the end – after so long without writing a novel-length manuscript, I’d worried that I’d forgotten how to do it. And I’d set myself a tougher task by choosing an adult-length novel rather than the 30-40K children’s novels I was used to.

Lykaon (or, to give it its alternative title, The Phoenician Bowl) is the story of a young Trojan prince (Lykaon) who is captured by the Greek forces when he’s out cutting branches from fig trees to use as chariot rims, then sold as a captive to a foreign land. Through trials and tribulations, he eventually makes his way back to Troy and eventually back onto the battlefield, where chance or fate throws him into the path of the warrior who captured him – but this time the conflict has changed, and the warrior no longer has any interest in ransoming Trojans.

The plot is inspired by a passage in Book XXI of The Iliad, where Homer gives the whole story of this young man in the space of perhaps a hundred lines. I read Stephen Mitchell’s translation of The Iliad in 2017 and the passage stuck with me – the brief brushstrokes of Homer’s hexameter providing such a vivid backstory for what was just another fight in the course of one of the bloodiest of days on the plains of Troy.

I tried to incorporate as much bronze-age archaeological detail as I could, including the depiction of the Trojans as an Anatolian people with their own language and gods, unlike Homer’s depiction where they’re almost indistinguishable from the Greeks. But I kept to the “facts” of Lykaon’s story as laid down by Homer, filling in my own fancies only where he’d left gaps for me to play with.

Once the manuscript was complete, I gave it a week, then converted it to an ebook and read it through on my Kindle. There were the usual typos and minor errors, but it seemed to hang together reasonably well. Then I gave it a good long rest of several weeks, before going through the manuscript line by line in Scrivener and hammering out any inconsistencies and infelicities of language. Again, it seemed to work OK as a book, but then I’ve never been the best reviewer of my own work.

I even produced my own translation of the hundred lines from Book XXI to include in an appendix. It’s been 30 years since I studied Ancient Greek, so there was a lot of looking up words and using other translations, but eventually I pulled together a reasonable attempt and added it to the end of the manuscript.

So on to the next stage. Throughout the writing of all of my novels, I’ve relied on my partner Sandra and my friend Colin to read my first drafts – both are writers themselves. But to make it seem more like a real book, I’ve always formatted a paperback and got copies printed at Lulu. It’s not that hard to put together a simple page format, and it’s not too expensive for one or two copies, either. 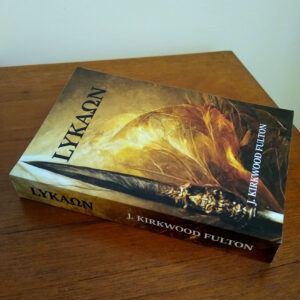 So now the book is (or will soon be) in the hands of my beta readers. After that – who knows? I was burnt out on agent rejection long ago, and don’t have the marketing nous that would make self-publishing worthwhile. But does it really matter? 70K words of Iliad fan-fiction was never going to be a commercial proposition, but it has done one particularly important thing.

It’s got the muse talking to me again.